2 days ago, by Voir Editorial Team New Music Releases You Need to Add to Your April Playlist

We need to talk about the music coming out this month.

As if March wasn’t explosive enough – with the likes of Lil Nas X, Zara Larsson, Silk Sonic, Drake, and Jorja Smith all releasing albums, music, and videos – it looks like April is set to be another great month for music.

Despite being only the first week of the month, the quality we’re now seeing has given many musicians a VIP pass straight into our favourite playlists. Chart-topping heavyweights Demi Lovato, Olivia Rodrigo, and BTS have all chipped in with exciting new projects, while debut soloist Rosé has impressed with her first single album. Justin Bieber has even made it back onto our radar after surprising us all with a new EP just weeks after the release of Justice.

But never mind our nattering, check out the music that has welcomed the start of April with a bang.

Demi Lovato – Dancing with the Devil… the Art of Starting Over

Demi Lovato’s much-anticipated seventh studio album was released on the 2nd of April, having been preceded by the singles ‘Anyone’, ‘What Other People Say’, and ‘Dancing with the Devil’ in the first quarter of 2021. The album follows Lovato’s period of recovery following her hospitalisation from a drug overdose in 2018, drawing on themes of recovery and self-empowerment. Acting as an ode to the darker times in her life and career, Dancing with the Devil… the Art of Starting Over captures Lovato’s highs and lows in raw honesty. This album marks Lovato’s taking ownership of her vulnerabilities, flaws, and fears, and signifies her ongoing journey towards self-love and liberation.

A YouTube docu-series, Demi Lovato: Dancing with the Devil, was also released last month to accompany the album, and provides a more in-depth look at the events of 2018. You can check it out here.

Rosé is best known for her work as a member of K-Pop girl band BLACKPINK, but 2021 marked the year she took her first steps into a solo career. Releasing her debut single album R last month, Rosé dropped two music videos. The lead single, ‘On the Ground’, came out on March 12th, and peaked at No. 70 on the Billboard Hot 100 – making Rosé the highest charting Korean female solo artist in the US.

The music video for her second single, ‘Gone’, came out on April 5

th – much to the excitement of fans all over the world. The song and its subsequent music video explore the mourning of a lost relationship, a popular topic for most love songs. The song is anything but typical, however, if the beautiful visuals and soft rock overtones are anything to go by. The track comprises all the components of a successful romantic ballad, as well as a suitable amount of angst to keep the narrative engaging.

We’ve lost track of how many times we’ve talked about Justin Bieber these last few months. Following a string of chart-topping singles, the Canadian singer finally released his sixth studio album, Justice, on March 19th. But this obviously wasn’t enough excitement for Bieber, who weeks later released a surprise EP titled Freedom on April 4th. Bieber had a central role in the EP’s production and has writing credits in every track.

Unlike the crowd-pleasing commercial releases of the singer’s previous work, Freedom directly reflects on his experiences growing up in the public eye and the mistakes he made along the way. Culminating in a meditation on his current circumstances, the gospel-inspired extended play emphasises how Bieber’s spiritual and religious beliefs intertwine with his everyday life.

2021 appears to be THE year for Olivia Rodrigo, who made waves back in January with her debut single ‘Driver’s License’. Preceding the release of her debut album later this year, the singer dropped another single: ‘déjà vu’. The track is already making the rounds on TikTok, with its dreamy intro and romantic aesthetic catching the attention of many fans across the platform. The song is characterised by a psychedelic indie-pop sound that lends itself well to the themes of heartbreak, fantasy, and obsession in the video.

Perfectly attuned to Gen Z trends, the music video adopts a nineties-noughties aesthetic that belies the darker realities of the narrative. Following a love triangle in which Rodrigo’s ex has moved on to another girl, the story highlights how the ex now recreates the ‘special moments’ he once had with Rodrigo (hence ‘déjà vu’). This realisation fuels Rodrigo’s resentment for her ex as well as a growing obsession with his new lover, who the singer tries to mimic throughout the video.

In the lead up to the release of their third Japanese album in June, K-Pop superstars BTS dropped ‘Film Out’ on April 2

nd. The song also features as the ending theme for the Japanese film Signal The Movie Cold Case Investigation Unit. Co-written by BTS member Jungkook and lead singer of the Japanese band Iyori Shimizu, the track is a ballad characterised by a slow build up and dramatic crescendo that highlights the narrative of being unable to save something or someone.

The music video builds on this storyline, presenting all seven members in a house thinking back on the past. In time the members also fade, becoming the memories they once cherished and tried to recall. The explosion of a drained hourglass signifies a turning point in the song, as the music hits a dramatic high and the house used for filming bursts into chaotic flames. Unable to control this turn of events, the video delivers the message that we aren’t always able to save the things or people we love the most.

That’s not all we’re going to see this month, either. Several albums and singles are set to drop this April, giving the month a needed energy boost as we come out of lockdown. Keep an eye out for Taylor Swift’s Fearless (Taylor’s Version), dropping April 9th, London Grammar’s upcoming third studio album Californian Soil, set to be released on April 16th, and Noah Cyrus and JP Harding’s debut EP People Don’t Change, scheduled for April 23rd (to name a few!).

France And The Hijab Ban – What’s Happening to Separatism

Sentimental in the City – Two Friends, a Series, and a Lot of Opinions 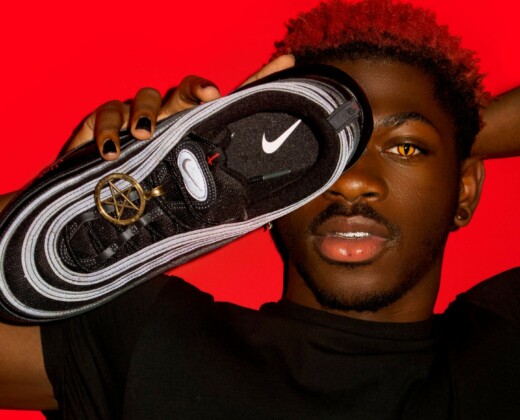 MSCHF v Lil Nas X ‘Satan Shoes’: What You Need To Understand About The Controversy